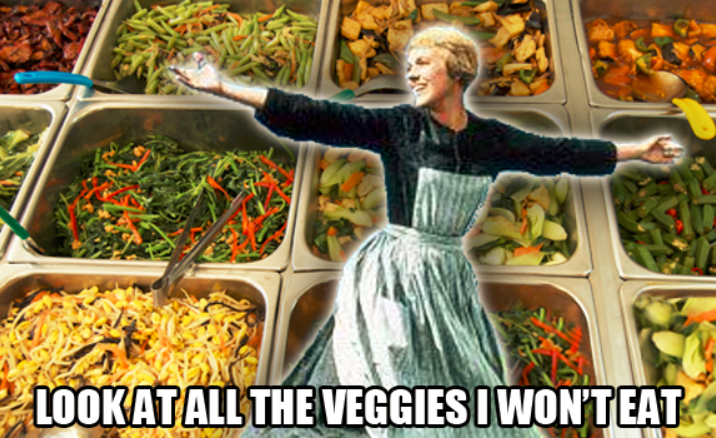 The Health Ministry is very worried about Malaysians… we are not eating enough vegetables and fruits, it seems. Das why la, never listen to your mother when she tell you to finish your greens!

Only a sad 6% of adult Malaysians consume enough vegetables and fruits, while the others either don’t get enough for a balanced diet, or there are some people who don’t eat them AT ALL, said the Ministry. Throw to the cat summore la, throw summore!

If you are the other 84%, you might be laughing and thinking, ‘that’s me’, but this matter is no joke. Do you laugh when you’re on sitting, constipated, on the toilet bowl and nothing comes out? We don’t either. So let’s peel back the layers and get to the root of the problem.

For the 84% of Malaysians who aren’t fans of greens, they’re probably like, ‘are you really asking us this?’. They prefer meat and carbs la. Nutritionists at the National Heart Institute (IJN) say that Malaysians are consuming too much animal products and not enough vegetables. Maybe they’re carnivores at stomach.

“Many tend to favour meat over vegetables and fruits, and this can be seen clearly when Malaysians eat out or buy packed food.” – Dr. S. Subramaniam, Health Minister, The Star

But why do we like meat better? Before we go on, let’s not go down the vegetarian-vs-meat hole k. We are just going to find out why people love eating meat so much. When we tried to Google studies or something, there aren’t a lot (almost none actually). There are articles on why meat is nutritious for people (and the opposite argument), but not so much why we enjoy it.

We did however find this study by the International School for Advanced Studies in Trieste, Italy, that claimed the human brain is hardwired to prefer red food over green, although with cooked food, the results are no longer reliable.

So it’s based on colour? Some might say that’s subjective. If you were to just ask anyone who likes eating meat, they’ll probably just give you a simple answer – it’s delicious.

Additionally, some of the reasons people cite for not eating fruits specifically is because it’s too much work. Need to wash, peel, cut… we are either too busy or too lazy to do it. Plus certain types of fruits are not cheap, especially since prices have risen in recent times – and we’re talking about non-seasonal fruits which are available all year round, like papayas, guavas, jackfruit, and bananas, to name a few.

What happens to your body if you don’t eat enough fruits & veggies?

Scientists from Imperial College London analysed 95 different studies on fruit and vegetable intake and concluded that eating 5 portions a day reduced the chance of heart attack, stroke, cancer and early death. The greatest benefit however comes from eating 10 portions (800g) a day. The research, which is published in the International Journal of Epidemiology, estimates that 7.8 million premature deaths worldwide could potentially be prevented every year if people followed the 10-portion diet.

Just how much is 5 portions? Here’s a collage someone already made just to give you some context:

Alternatively, this is the guideline for 1 serving/portion, according to Rachel Beller, founder of the Beller Nutritional Institute:

- ½ cup of fruit (equivalent to 1 portion, same as the following)
- 1 medium piece of fruit
- ¼ cup of dried fruit
- ½ cup (4 ounces) of 100% fruit or vegetable juice
- 1 cup of leafy vegetables
- ½ cup of cooked or raw vegetables
If you are the super kiasu healthy type of person, you can aim for 10 portions (800g) a day by following this chart: 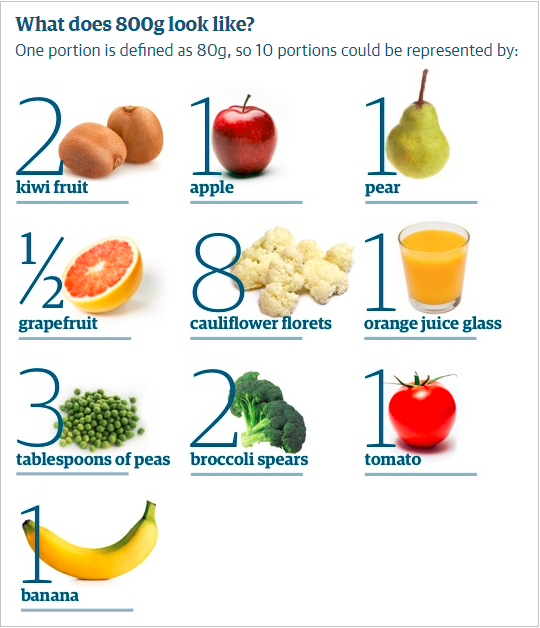 You can change up the fruits and vegetables as you like. Img from theguardian.com

Now, what happens if to the complete opposite and DON’T eat enough vegetables and fruits? Here are 4 things that will surely follow:

1. Cannot poop: Veggies and fruits are major sources of fibre, a food element that is necessary for digestion. Low fibre intake leads to constipation and diverticular diseases (small sacs or pockets growing in the colon wall). In the long term, it could cause hemorrhoids, tissue damage, and infection that would require surgical treatment.

2. Vitamin deficiencies: Fruits and vegetables contain some of the most vital nutrients for our health, especially vitamins. So without proper intake, the 4 most common diseases caused by vitamin deficiencies are scurvy, rickets, pellagra and beriberi…so don’t forget to load up on those berries guys.

3. Weight gain: Because vegetables should form a large part of your diet, their absence might be filled by higher-calorie foods (animal-based foods/fried snacks) that cause weight gain and nutrient imbalances.

4. Terrible diseases: Not getting enough fruits and veggies could increase the risk of developing heart disease, high blood pressure, diabetes, stroke, even cancer and depression.

We’re sure there are more detailed analyses which you can Google yourself, but this is the gist of it. Bringing it back to Malaysia, there is undoubtedly a national problem of diabetes and cardiovascular diseases.

"Heart disease remains the top killer in the country, while Malaysia is also known as Asia’s fattest country"

Good habits should be inculcated when a person is young. Perhaps moms can sow the seeds of good eating habits in their kids. Don’t take them out for McDonald’s or KFC when they get 5As for UPSR la.

“They will tend to associate good results and success with fast food. It is not a good thing in the long run and parents need to change their mindset on this.” – said Dr. Subramaniam

Some parents go through extreme lengths to get their kids to eat healthy by making cool bento box meals for them. Understandably not every parent has the time and resources to do this, so one way is to get kids involved in the shopping and cooking process. Let them pick a few items to cook for dinner, for example.

Otherwise, try the ‘one-bite rule’. Research shows that kids who have initially rejected a food must be exposed to it at least 8-10 times for the food to be accepted. Some parents have had success by getting their kids to try at least one solid mouthful of a rejected food whenever it is served. After enough exposures, their kids might start liking it.

For adults, maybe try Googling yummy vegetarian options near your office or house, maybe make one day your vegetarian day or something. But you still need the recommended dose of 5 portions a day, so no choice but to suck it up and eat it. If you’re bored of the same old veggies, maybe try looking for new recipes online also.

The Aussies have the same problem, but they’ve come up with an app named VegEze (download here, from Apple store only) that challenges users to eat 3 different veggies in the evening every day for 21 days. The app tracks their intake and tallies vegetable serves, with reminders and rewards.

The Government also comes up with campaigns to help, one with the Education Ministry and parents. Last year they launched the ‘Eat Fruits and Vegetables Campaign’, and this year it was the ‘Suku Suku Separuh’ campaign to encourage eateries to have calorie labelling for their food and drink.